Admission to VIT’s B. Tech programmes is based on the VIT Engineering Entrance Examination (VITEEE). 2015 saw over 2,00,000 students applying online for the examination.
The exam is a computer based test (CBT) that is held in centers across the country and abroad. Questions are based on the specified syllabus with options to attempt papers in either Physics, Chemistry, Mathematics and English (PCM) or Physics, Chemistry,Biology and English(PCB).

No Negative marks for wrong answers

Posted by Siddharth Jain at 2:42 PM No comments: 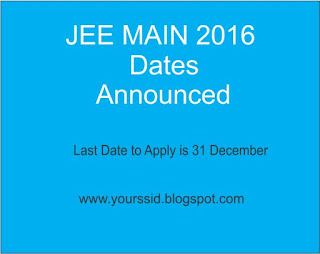 For official notice visit this link.

For assistance in filling different engineering entrance forms and subsequent counseling and college selection, feel free to contact us. For availing our services mail in your request to siddharth@yourssid.com or SMS HELP to 0-9887932499
Posted by Siddharth Jain at 9:51 PM 2 comments:

Posted by Siddharth Jain at 10:36 AM No comments:

COURTESY: TELEGRAPH
The government is unlikely to crack down on coaching institutes, although a committee set up by the IIT Council had recommended a regulatory regime.
Sources familiar with the government's possible approach said the HRD ministry would reject the Ashok Mishra panel's suggestion to set up an All India Council for Coaching for Entrance Examinations (AICCEE) to regulate fees charged by coaching institutes and ensure a minimum standard.
The panel, headed by IIT Roorkee chairman Mishra, had said coaching was a lucrative "industry" worth approximately Rs 24,000 crore a year.
Two members of the panel argued that when technical education regulator AICTE could regulate private engineering colleges, the proposed AICCEE would do the same job for coaching institutions.
The AICCEE, they said, should allow only those institutes that maintain a good faculty and facilities and don't make false claims.
The Mishra panel, set up to examine whether the existing two-tier test - the JEE -Main for admissions to NITs and the JEE -Advanced for IITs - for taking in BTech students could be merged, said the purpose of education was mental refinement, not passing an entrance exam.
But Satya Narayanan R., chairman of Career Launcher, a coaching institute, said the government could not restrict individuals or institutes from offering a service against a fee mutually agreed upon by the provider and the client.
Many state governments, he said, provide funds to students from socially disadvantaged groups so that they can enrol in coaching institutes to crack exams that have to be cleared to enter the IITs, other top tech schools or the civil services.
"Coaching will never stop as long as there is a gap between demand for good institutions and scant supply," Narayanan said.
Earlier, another panel, headed by Rajat Moona, director-general of the Centre for Development of Advanced Computing, had found that the impact of coaching had increased since the system of giving weightage to board marks was introduced in 2013 for admissions to NITs.
It said that 14.63 per cent of candidates who appeared for the 2012 All India Engineering Entrance Examination, which became the JEE Main in 2013, had admitted to having been coached. In 2013 and 2014, this percentage increased to 18.15 and 18.89.
Posted by Siddharth Jain at 12:41 PM No comments:

SOURCE: HINDUSTAN TIMES
Students preparing for IIT and NIT entrance exams should prepare well for their Class 12 exams as the HRD ministry has decided that there will be no change in the pattern of joint entrance examination (JEE) 2016.
Putting an end to the confusion over a change in the pattern of JEE 2016, the human resource development (HRD) ministry has decided to continue the same pattern of JEE 2015 under which 40% weight is given to board marks and 60% to the JEE-Main score.
“We have received the report of the committee and it will be studied in detail. However, as only a few months are left for the entrance exams we want to give ample time to students to prepare and hence have decided not to make any changes to the format right now,” said a senior HRD official requesting anonymity.
A sub-committee of the National Institutes of Technology (NIT) council had recommended that Class 12 board marks should not be taken into account for admissions in NITs. However, HRD minister Smriti Irani had formed another committee to examine the issue. The ministry has received the report and its recommendations, if accepted, will be applicable only in 2017.
Posted by Siddharth Jain at 8:47 PM 2 comments:

Email ThisBlogThis!Share to TwitterShare to FacebookShare to Pinterest
Labels: BOARD WEIGHTAGE IN JEE MAIN, JEE 2016

Three years after the UPA-2 government made sweeping changes to the admission process at top engineering institutes of the country, an expert panel appointed by its successor government has recommended another set of changes, including a single entrance examination for both IITs and NITs, no weightage to school board marks, and a compulsory aptitude test. The committee, headed by academic Ashok Mishra, has suggested that JEE (Main) and JEE (Advanced) should be merged into a single entrance exam, conducted by the IITs and intended to test a candidate’s knowledge of physics, chemistry and mathematics. Currently, JEE (Main), meant for admission to the NITs, is conducted by the Central Board of Secondary Education (CBSE), and JEE (Advanced) by the IITs.
The recommendations were made public on Saturday for further consultation with stakeholders. The HRD Ministry has not announced a timeframe to decide on the matter, but has clarified that JEE 2016 will be conducted in the same way as now, and that the 40 per cent weightage for Class 12 marks for admission to NITs would continue. The only change would be that the top 2 lakh candidates, instead of 1.5 lakh, in JEE (Main) will qualify to sit for JEE (Advanced). The process of admissions to IITs and NITs was overhauled completely in 2013 after then HRD Minister Kapil Sibal persuaded engineering institutes to give weightage to a candidate’s school performance. This was done to help students focus on their school education, and to wean them away from coaching classes. A review by the institutions three years on has shown that this decision has made little difference to the tuition industry, whose hold on aspirants has, in fact, increased. The IITs and NITs are in favour of scrapping the weightage to board marks. The Ashok Mishra committee was set up to study this proposal, and examine the feasibility of a single entrance test for IITs and NITs. The aptitude test suggested by the committee is intended to test candidates’ inclination for science and innovative thinking. Passing the test will be a prerequisite for appearing for JEE, the report states. The aptitude test, designed to weaken the coaching culture, could be offered two or more times in a year, and a National Testing Service should be set up next year to conduct it, the panel has suggested. Based on their performance in the aptitude test, about 400,000 candidates shall be shortlisted to take the JEE, which will be on the lines of the current JEE (Advanced). Ranks will be issued to 40,000+ students who can seek admission based on a common counseling, it said. It also suggested that IITs be requested to develop mock JEE exams to help students prepare, and to wean them away from the coaching industry.
Posted by Siddharth Jain at 8:46 PM No comments:

Siddharth Jain
An engineer by education and a teacher by profession. My passion for teaching and helping out the students lead me to start this journey of Helping Hand in 2008-09 and its continues till now. Nowadays I post on the Facebook page and Quora more frequently.