ALL THE BEST FOR CBSE BOARD EXAMINATIONS 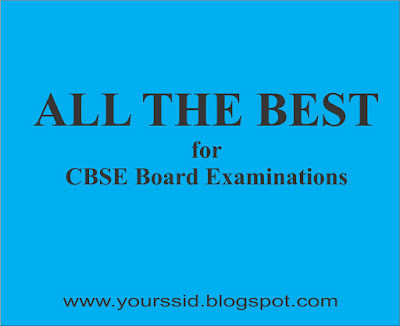 Posted by Siddharth Jain at 5:35 PM No comments:

Email ThisBlogThis!Share to TwitterShare to FacebookShare to Pinterest
Labels: All the Best for CBSE Board Examinations, CBSE, CBSE BOARD EXAM

THE proposed NAT, to replace JEE Advanced, will have English as a subject!!!

A high level meeting of directors of all Indian Institutes of Technology will be held in the city in the third week of this month to decide the fate of the JEE for admissions to IITs and NITs. The Centre plans to replace the JEE with the National Aptitude Test, which will be conducted along the lines of the SAT in the US.
The new exam will include English as a subject. If approved, it will be in place for the 2017-18 academic year. This has the potential of removing a large number of students who hail from non-English medium streams of education.
IITs are said to be proposing the same two-stage exam for IIT admissions but want to replace first stage “the JEE (Mains)” with the NAT. The JEE (Advanced) will continue as second stage.
In stage-I exam, the IITs directors are proposing to include English as an additional subject since students coming from non-English medium backgrounds were facing difficulties at the IITs where the medium of instruction is English.
The Centre wants to test the English proficiency of students at the screening level. The IITs had held two rounds of discussion earlier.

Helping Hand View: We totally oppose the inclusion of English in such testing system as this will virtually hit the Hindi medium students dream of JEE.
Posted by Siddharth Jain at 10:07 PM No comments:

SOURCE:TELEGRAPH INDIA
The National Institutes of Technology may no longer give weightage to Class XII board marks while admitting BTech students from next year if the institutions and the government have their way.
An NIT director said the institutes, along with other centrally funded technical institutions (CFTIs) like the Indian Institutes of Information Technology (IIITs), were more likely to admit students on the basis of their JEE Advanced score - like the IITs do.
"There will be no need for giving weightage to board marks," the director told this newspaper.
Under the existing system, the IITs admit students based on how they perform in the JEE Advanced, the second exam in the two-tier test after the CBSE-conducted JEE Main.
Over 12 lakh students appear for the JEE Main, but only the top two lakh are eligible to take the JEE Advanced.
While the IITs don't give weightage to board marks, aspirants need to score at least 75 per cent in their board exam or be among the top 20 percentile holders - irrespective of their performance in JEE Advanced - to be eligible for selection.
The NITs, IIITs and a few other engineering institutions - which don't follow any eligibility criteria but could introduce cut-offs once the weightage for board marks goes - have been admitting students on the basis of a 60:40 system. Under this system, 60 per cent weightage is given to the JEE Main score and 40 per cent to Class XII board marks.
The idea behind the weightage for board marks, introduced under the earlier government, was students would focus more on school education instead of private tuitions to crack entrance exams.
But two panels set up by this government, one headed by IIT Bombay director Devang Khakhar and another by Rajat Moona, director-general, Centre for Development of Advanced Computing, had recommended scrapping the weightage for board marks while admitting students to the NITs from 2016.
The Moona committee found that the percentage of students taking private coaching had increased after the system of giving weightage to board marks was introduced.
The HRD ministry then set up another panel, headed by IIT Roorkee chairman Ashok Misra. In its report submitted last November, this committee, too, said the weightage given to board marks now for NIT admissions should be scrapped and there should be one engineering entrance test, possibly from 2018.
But aspiring engineers, this panel said, should have to clear a SAT-like National Aptitude Test to be eligible to appear for the entrance exam.
Sources in the HRD ministry said there was agreement among the IITs and other CFTIs that from 2017, students should be admitted based on how they did in their JEE Advanced.
The NIT director this paper spoke to said the JEE Main was likely to stay in 2017, but as a filter for the JEE Advanced.
The Mishra committee suggested that the government set up a national testing service (NTS) as an independent body to conduct the aptitude test, modelled on the SAT, held for admissions to US colleges.
HRD ministry sources said the NTS might be set up this year and start operating from 2018. The aptitude tests, they added, might be held more than once every year so that students can improve their performance.
Posted by Siddharth Jain at 10:05 PM No comments: