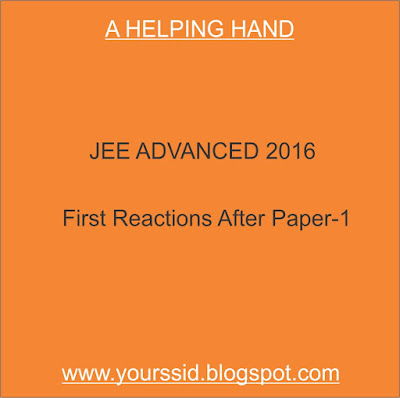 Well Paper-1 this year was far more student friendly than the last year one. The Paper had three sections each in three subjects containing 18 questions per subject. Overall marks were 186.There was partial marking in the multiple option correct type questions. So due to lesser number of questions and also not very high difficulty student appeared far more relaxed than the same time last year.

The scenes at examination hall were surprising as many students were seen without shirts, torn sleeves which looked bad. These are students not thief or criminals.

Physics- Very well balanced paper. Three to four questions were quite new in concept and were difficult to solve. Integer questions were the easiest. A score of 45+ will be a very good score.

Chemistry- Students liked this section the most and it appears from there reactions it was easier this time.

Mathematics- The initial reactions of the students suggested that they found this to be very tough though the analysis of teachers and last year toppers suggested that it was milder than last year.