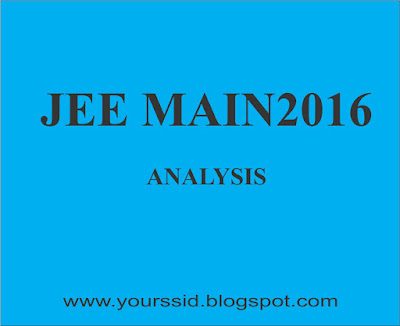 JEE MAIN 2016 was relatively easier than the JEE MAIN 2015. The cutoff score for JEE Advanced would be lower than last year because of increase in number of candidates from 1.5 Lakh to 2.0 Lakh this this year. Overall it was a balanced paper.

Analysis of Physics Section
Physics was again the toughest of the three sections. But it was bit easier than last years one. There was mistakes in two questions where two options are correct. This year paper had less calculations as compared to last year. The weight-age of XII class topics was higher and paper had four questions from Semiconductors. Almost 18-20 questions were straight or similar to question students practice at their coaching institutes. So I feel a score of 70+ is a good score.

Analysis of Chemistry Section
The paper was NCERT based and was more factual. Practical Chemistry and Environmental Chemistry based questions were more in number. There is error reported in one of the questions.
A score of 80+ is a good score.

Analysis of Mathematics Section
It was again easier than last year ones though it was lengthy.All topics were covered. Almost 20 questions are NCERT based while rest requires much greater knowledge. A score of 75+ is a good score.

(This analysis has been prepared in consultation with me colleagues at RG ACADEMY AJMER .)
Posted by Siddharth Jain at 7:03 PM